Is Arnab Goswami the next Amitabh Bachhan? It was a quiet February afternoon in central Mumbai's financial hub Lower Parel. Executives from hundreds of companies, mostly in the banking and financial services sector were busy in their offices analysing data and numbers, discussing targets, profits and career opportunities over a cup of coffee/tea post lunch. The afternoon was special at Kamala Mills, an old textile establishment which was closed a few decades ago ruining lives of many workers and is today bustling with thousands of white collar executives, with many of them making millions every year. While the millionaires and wannabe millionaires were engrossed in their glass buildings, there was growing heat outside. A red monstrous vehicle was rolling inside the compound and some of the vendors near the gate and executives strolling around could sense the presence of someone unusual. Kamala City had seen many expensive vehicles and many of the stature of Phantom, Lamborghini etc. roll inside the compound everyday, but there is someone inside this vehicle that shook them. This gentleman was wearing black rimmed glasses and sporting a white French beard. 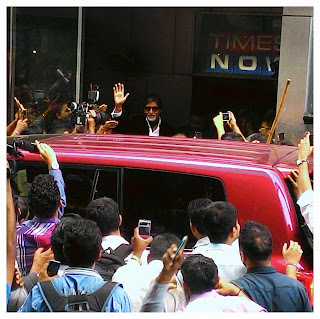 Photo Caption: AMITABH BACHHAN RESPONDING TO A SWELLING CROWD "Boss this is Big B," some one shouted. People then ran behind the car like children running behind the candyfloss man in distant villages. The car passed through the narrow road crossing by dozens of banks, offices of stock brokers and conglomerates to reach at a relatively smaller office -- A television channel called Times Now, owned by BCCL, which sells world's most circulated newspaper, The Times of India. "What happened? what happened?" the chatter was slowly growing inside Kamala City. Entire offices were emptied as people flocked around the narrow roads in front of the television channel's office. The tall somewhat old and extremely good looking man -- Amitabh Bachhan -- entered the studio and people waited outside. More joined them soon -- Families who had come the Passport office nearby arrived, while unruly kids and stylish teenagers arrived from a nearby amusement and sports center --- even some from outside Kamala Mills. I was privileged as the television channel's office is bang opposite mine. I literally had a balcony view to my privilege. After about half-an-hour, the old man came out, the crowd, which by now had swelled to several hundreds shouted in excitement, "Amitabh, Amitabh...we love you..." The most popular person obliged and waived his hand gently and crowd responded with a synchronized hysterical roar applauding the biggest entertainer in India. Cameras flashed all around, everyone wanted get close to the superstar. But then he had to go. For a moment it seemed the hysteria ended and everybody would go back to work now. 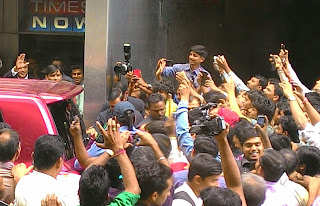 Photo Caption: ARNAB GOSWAMI RESPONDING TO A SWELLING CROWD But wait, the crowd turned their obsession to another entertained named Arnab Goswami, the editor of Times Now and the anchor of India's most watched news show, The News Hour with Arnab. "We love Arnab..we love Arnab." A visibly humbled Arnab then did something which no one expected. He waived his hand just like Amitabh Bachhan did and the hysteria began again. Camera's flashed again, people ran towards him. School kids from the amusement center grabbed him. People in groups started taking selfies with the man. And guess what he obliged many of of them. People confessed of their love for him. Middle aged men praised him for his daring interviews. Many reminded him of a particular interview with a youth leader, who could have become the Prime Minister of India. Young executives praised him for his smart management of Pakistani guests on his show. Then one old man said,"Arnab you know what? I can't sleep if I don't watch your show at the end of the day. Please don't go for holidays. You make me proud of being an Indian." The show ended their Arnab waived his hand again and moved inside the studio to grill another set of panelists for the next show. In the meantime I saw his interaction with Amitabh Bachhan later in the night. Arnab divulged a few details about his passion for Bollywood. Most candid was that he has a poster of Deewar movie in his bedroom and that his favourite dialogue was "Rishte mein hum tumhare baap lagte hain" from Shehenshah movie. The funny moment was when Amitabh Bachhan said he couldn't speak the dialogue as it needs him to be angry on the person he is looking at while who could not get angry with Arnab. Then Arnab replied," You should know I have the habit, you may call it a bad habit, of getting what I want to know." I think the way Arnab touches people across class and communities at least in English speaking India. He is definitely a worthy successor of Big B as one who can connect and entertain the nation, because he is a man who knows, "What the nation wants to know?" :) PS: I also wanted to take a selfie with Arnab but was pushed by two school kids who entered the frame at the last moment :) 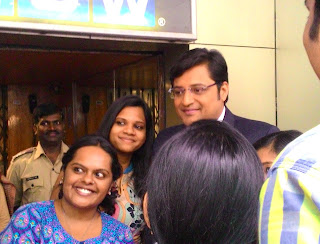 Photo Caption: ARNAB GOSWAMI TAKING SELFIE WITH YOUNGSTERS. THIS GROUP OF OVER ENTHUSIASTIC YOUNGSTERS PUSHED ME ASIDE TO ENTER INTO THE SELFIE AT THE LAST MOMENT.
Posted by sourav mishra at 8:18 PM

Great article, Thanks for your great information, the content is quiet interesting. I will be waiting for your next post.

So beautifully you have written this.. It was like a film is playing in front of me .